The Evolution of Language 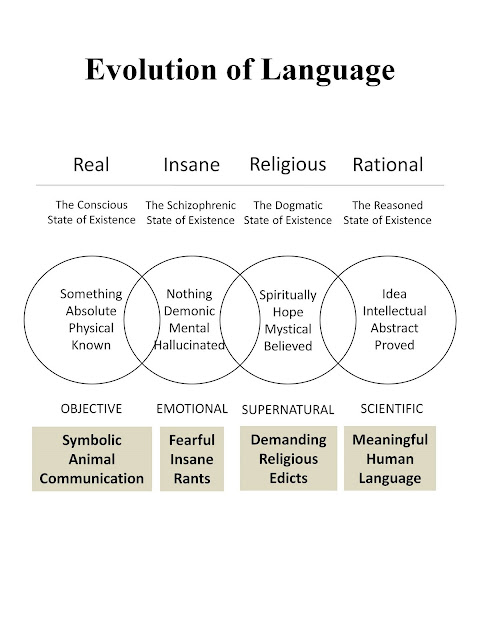 
To this point, we have fairly successfully tracked
The Evolution of Language

Notice how we have moved from the symbolic nature of animal communication through the fearful nature of insane rants and through the demanding nature of religious edicts to now end up at the meaningful nature of human intelligence.

Re-Examining the Four Alternatives to gain further understanding of how the human mind works.


Under the REAL Alternative
Non-human animals (the beasts) purposefully create sounds to symbolize the physical existence of that which their brain has consciously imaged the factual nature of. Beasts communicate that which their brain has factually imaged by creating a specific sound to symbolize it's effect on and within their brain. To humans, most beastly sound seems noisy. It seems noisy only because humans do not understand why it is being created.
Oftentimes, a human baby will make sounds that seem noisy for the very reason most beastly sound seems noisy.

Under the INSANE Alternative
Insane humans use sound in an effort to reveal the existence of that which has no relationship with or to physical nature. Although the sounds of insanity may seem familiar, they lack a real application or rational meaning. This is because there seems to be no known purpose or identifiable reason for their creation. It is as if the sounds occur in a manner similar to the noise resulting from nature interacting with nature at the inanimate level.
The insane do, of course, have a reason for creating human-like sound. It is the insane nature of their demons. But since the actual mental existence of these insane demons cannot be verified, their use of human sound seems noisy—that is, without a real cause or rational purpose.

Under the RELIGIOUS Alternative
Religious humans also make human sounds in an attempt to explain the existence of that which has no relationship to or within reality. The religious are attempting to explain the sounds resulting from their acceptance of the claims of their trusted 'intellectual' sources. However, since these claims have no known source, religious persons are considered to be spiritually insane rather than mentally insane. Spiritual insanity is insanity as a result of volitional belief rather than by some sort of non-volitional mental impairment.
The religious attempt to explain why it’s okay for the sounds they use to exist absent a known cause or rational purpose. Unlike the insane, religious persons have no known or knowable reason for why their sounds exist—and that does not seem to bother them in the least. This is because they have their God on their side. Their God takes the brunt of their insane beliefs, permitting them to avoid having to explain the absurdity of their claimed supernatural, spiritual, and/or mystical existence and/or cause.
The religious, of course, deny their close link with insanity. But notice—absent a link with reality, they are left with nothing to explain. If a no-thing actually did exist, what could be said about it? Nothing! Again notice: The religious have been trying to, and continue to try to, explain the existence of a no-thing. It is as if they are insanely screaming into the darkness of no-place.
This is evidence of mental illness. Whether purposeful or not, it is still evidence of mental illness. Mental illness purposefully imposed on oneself is mental illness nonetheless.

Under the RATIONAL Alternative
Rational humans create language as an epistemological tool—a tool to explain reality, necessarily including the reality of happy human existence right here on earth. Knowing what one is talking about takes place in reality, explaining what one understands about that takes place in intelligence.