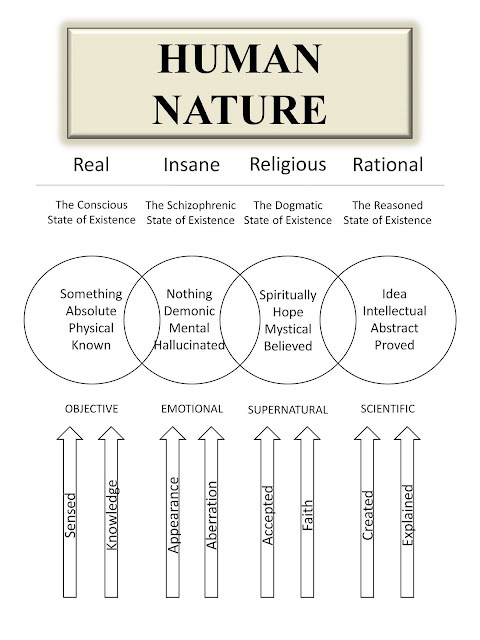 Recall when we previously discussed the above “Human Nature” graphic.

Recall that we discussed the premise that to become intellectual, one needs to fully remove oneself from the stupefying influence of religion. Let's now continue this discussion, but first we will remove the insane and the religious alternatives from the above “Human Nature” graphic. See the resulting graphic below. 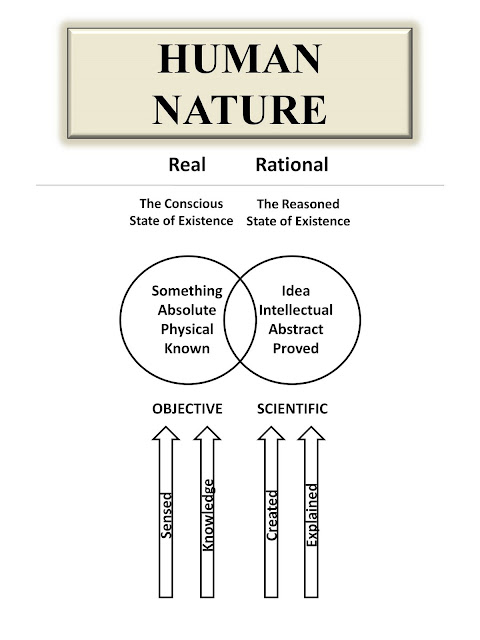 If one were searching for why the Space Shuttle exists and one went to an insane asylum to conduct that research, one’s efforts would be frustrated by what one finds there.

Similarly, as one searches for the requirements of human happiness but remains connected to, and thereby influenced by, the underlying principles of religion, one’s efforts will likewise be frustrated by what one finds.

This is because the dogmatic nature of religion is a purposeful attempt to explain the existence of nothing. As such, dogmatic religion is not different from what mental insanity is—it is merely the mystical (not intellectual) expansion of it.

Whenever we remain connected to a fundamentally insane premise and/or religious principle that will frustrate our intellectual efforts. One cannot pursue intelligence religiously, only rationally.

For one to discover why humans have remained in existence for as long as they have, one must first observe and then fully understand what proper human behavior is and requires of ones own behavior. It is only those persons who act in a proper manner that can be held responsible for the continued existence of human beings and the happiness upon which that depends.

Go To "From Survival to Happiness"