From Survival to Happiness 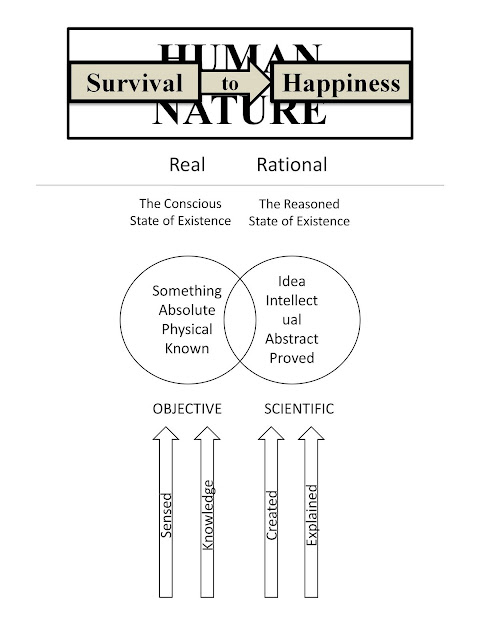 When insanity, and its religious counterpart, is removed from the discussion, we are left with the above “Human Nature” graphic. Now we only have the real and the rational alternatives as the focus of our discussion. We will study these for the purpose of understanding what a proper human existence is right here on earth.

Ethical Behavior
(personal survival)
Under the laws of human nature, and therefore under the principles of ethics, is where we talk about survival—personal survival. To survive means to continue to being what one is; and what one is, is a living human being. Notice that survival does not, and cannot, include death. This is because to die is to fail to survive. Like eternity, survival is not a time-sensitive idea. Survival does not mean some kind of temporary existence; it means permanent existence. To survive means to not die, ever! But notice how this seems to contradict that which one sensually knows to be the case. Let me emphasize that the contradiction only seems to exist. The evidence is otherwise.

To discuss the issue of personal survival—we must move the discussion from the real to the ideal, from the physical to the rational, from the objective to the conceptual, from sensual knowing to rational understanding, from personal selfishness to social capitalism, from timed existence to eternal existence, from knowledge to intelligence.

Moral Behavior(Social Happiness)
As previously discussed, social happiness is the epistemological concomitant of the metaphysical idea which is ones personal survival. Where personal survival is a word based in the eternal nature of physical reality, happiness is a concept based in the rational nature of human intelligence. Where survival involves knowing what one’s physical person requires for it to remain alive for a normal lifespan, happiness involves understanding what the eternal nature of one’s living-self requires for it to remain in existence forever. Survival of ones person is a physically potent idea, where ones happiness is an intellectually potent idea. However: One cannot be separated from the other.

Experiencing happiness, then, requires reason, not emotion. As a matter of fact: Emotion will interfere with one’s experience of happiness. To experience happiness one must be able to understand that there is an alternative to the 'eternal' death of ones living-self and that one is able to experience that alternative. But to stop here is to fail. One must actually do that which is a requirement for one to experience happiness. Otherwise one will not experience it. One must act consequentially; i.e., one must purposefully create the consequence responsible for one to existence happiness. This requires one to think about what the requirements of experiencing happiness are and then putting into action those virtues required to bring about a happy experience.

I am frequently asked, “Do you believe you are going to die?” I respond with “No! I know that I am going to die.” But this is, of course, not a completely accurate response. And the reason for this is that knowing is "that automatically occurring sensual response which takes between two real things when at least one of these real things is a brain." In other words, I have not sensually witnessed, observed or experienced my own death. Therefore, the claim “No! I know I am going to die” is not based on what I know to be the case. The more accurate way to respond to such a question would be: “No! I understand, from thinking about the available evidence, that one day I will die.”

However, when one understands that one’s physical death does-not—as if by the law of necessity—require that the existence of one’s living-self ceases to exist, this understanding will have an evolutionary effect on the way one thinks and therein on the way one behaves. This is saying that, when investigating human happiness and what it requires, one cannot be limited by what is sensually available to one’s brain. It must also include that which one’s mind rationally understands to be the case. When investigating human happiness, the goal is to understand why properly functioning human beings; i.e., persons driven by happiness, must behave in accordance with the laws of nature determining a proper human existence.

We need to understand the true nature of proper human behavior rather than just knowing that human beings are a certain kind of living organism. Once we understand why properly functioning human's behave in the ways they do we can then begin to understand what the source of human happiness is and that upon which its continued existence depends.

You and I and they do exist. That is what we need to be talking about. What is that? It is the existence of one's living-self and what it requires of one's behavior for it to remain in existence forever.

It must be acknowledged that it is impossible to understand something about that which one knows absolutely nothing-at-all about. Existence is perhaps the most challenging idea to understand.

One cannot go to a market and purchase a pound of existence. Existence does not exist in that kind of way. Existence conceptualizes the absolute nature of physical reality into the abstract nature of conceptual intelligence. Again; existence is reality idealized into a concept and then stored in the human mind along with its definition. The definition explains why existence was brought into existence by the human mind, The existence of one's living-self is not what ones physical existence  is, but rather is that ones physical existence does exist is what it is.

Where 'reality' denotes the existence of the physical existence of all real objects, 'knowledge' denotes the imaged influence of those same objects on and within a human brain. Where it is said that the sensually known objects of reality consist of physical characteristics, it is likewise said that their factual influence on the human brain consists of the knowledge required for it's mind function to understand it's purpose. Where objects consist of certain physical characteristics, their imaged knowledge consists of information. Information; then, is that audio/visual symbol the human mind created to denote the existence of that which that human mind requires prior to it being able to explain the fundamental nature of, and requirements of, human happiness.

The issue boils down to this: Every living organism will eventually die. But does that, as if by the law of necessity, demand that its living-existence has gone out of existence? The evidence is clear, and the answer is no. What is the evidence supporting such a claim? It is the absolute nature of the living existence of you and me and them!

When your mind begins to understand that your living-existence does exist and that there is a way in which you can cause it to continue to exist—even beyond your own lifespan—this understanding will set your mind free of the mystical influence religious belief may now enjoy over its rational operations.

Acknowledge this: Unlike the knowing function of your brain, the understanding function of its mind, called thinking, does not proceed automatically. Thinking (the virtue of understanding) is that mind function that must be done—it must be volitionally engaged. If your mind is to ever begin to think, you are the one who must cause it to do that. I can’t cause you to think; no one can. That is your responsibility. It is your intellectual responsibility as a properly functioning human being to think about what you are, where you are living, and what these require of your behavior prior to considering yourself to be a properly functioning human being.

To survive means to do that which your nature, as a certain kind living organism, requires of you for your life to remain in existence for as long as possible. A person living alone on a deserted island can be considered to be a properly functioning human being, but he cannot be considered to be a rational functioning member of society. Recall from a previous discussion that it is the natural consequences resulting from one’s social interactions that determine whether one’s actions are rational or not.

In other words, the island dweller can only do that which is required to live throughout a normal lifespan. He cannot do that which is required for his living-existence to continue to survive beyond his own physical death. He can benefit from his selfishly motivated actions to remain alive for a normal lifespan, but his living-self cannot benefit from a fundamentally profitable social interaction.

Do not become confused by what is being said here. This is not saying that people who do not (for whatever reason) have children cannot be considered to be functioning in a proper human way. That would be called an absurdity. What is being said is that they have not experienced the fundamental requirement for experiencing true happiness.

An example: When I watched my daughter Kristin being born that made me happy, very happy. I didn’t care why. Being happy does not need to be understood or explained. This is because happiness is the natural and normal intellectual state for rational human beings.

But: When I watched her die all the rules changed. I needed to understand that. It wasn’t something I wanted to do. It was something I had to do. I had no option as to how I 'instinctively' responded to watching my baby die. The issue was, either understand it or go insane. Going insane is the intellectual equivalent of physical death. This remains the most serious issue I have ever faced. I cried every single day for 20 years before I got to a place where I understood just what the hell had happened to me. I am not happy about what I discovered. But I do understand what happened to me both physically and intellectually. I understand why the pain is so overpowering and why it will never go away, and why I do not what it to ever go away.

Happiness is an idea abstracted from what is understood to be the case. When one understands one is not only able to act in a personally productive way but one has done so. The natural result is intellectual happiness. Intellectual happiness is the fundamental consequence experienced as a direct result of personal production. Happiness, then, is a rational idea rather than being an emotional [instinctual] reaction to a fundamentally pleasurable experience.

Happiness does not occur automatically just because one has done whatever one damn well pleases. Notice how happiness cannot be experienced via hope, religious or otherwise; it can only be experienced via the fundamentally selfish act; i.e., the purposefully selfish capitalistic reproduction of one's living-self. The fundamental purpose of behaving in a proper human manner is to experience happiness. It is to experience the consequence required prior to being able to fully understanding the true purpose of the living existence of ones-self.

Go To "The God Conundrum"