The sound which is 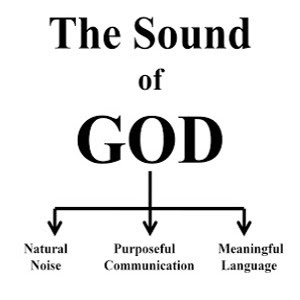 Recall in the opening comments of Page-1 where the three fundamental types of sound were discussed.

The purposefully created sounds of non-human animal communication [the beasts] cannot be called words. The reason for this is that their sounds lack a defined meaning or understood purpose. The sounds of beastly communication are only symbolic. Their sounds simply 'vocally' symbolize the automatically occurring sensually known existence of the physical existence of real objects; and their interrelationships.

Animal communication takes many forms. It symbolizes danger, anger, and a desire to mate. It symbolizes acceptance and submission. Do some humans communicate these kinds of things via 'simple' sound symbols? Yes, they do!


Also, recall the discussion of purposefully created human sound. Humans purposefully make specific types of sound to explain something they understand about the nature of nature, including the nature of happy human existence right here on earth. The sounds humans use to explain what is understood to be the case is not called communication, it is called language.

Whereas beasts (including some irrational humans—including nearly all religious humans) make sounds to symbolically communicate what they sensually know to be the case, rational humans use language to explain what they understand about the nature of human nature and that upon which its happy existence depends.

The difference between emotional 'beastly' style of human communication and the intelligent use of language is called understanding. Whereas beastly functioning humans base their conclusions on their instinctual emotional reactions to what they sensually know to exist, intelligent humans function based on what they understand about the nature of physical reality, necessarily including the nature of happy human reality.

Humans are a specific kind of animal. They not only act emotionally, in the sense that beasts act emotionally, but they also function intellectually. 'Human' does the existence of the intellectual animal. It is intelligence that separates animals into two groups; the beasts and the humans; i.e., the emotional and the rational.

Since human denotes the physical existence of the intellectual animal, then, it is called a word. Much like dog and horse are called words. But since its definition explains how the human animal is different from all other animals, then, it [the definition] is considered to be conceptual.

Under the idea visually symbolized as language, most of the terms used are conceptual. They are conceptual because they explain the abstract nature of ideas rather than, more simply, denoting the physical nature of objects.

Since the non-human animals—the beasts—have not demonstrated the ability to idealize reality they; therefore, cannot be considered to possess an intellect. Their sound symbols cannot be called either words or concepts. This is because they do not have a defined reason for their existence. The best that can be said about beastly communication is that it 'emotionally' symbolizes the physical existence of [not the intellectual nature of] what the beasts 'sensually know' to exist.

Notice how the language of the people we have hired to run our government for us seems to be a very noisy kind of human sound. This is because they seem to have abdicated their human intellect to a lesser standard. They have abdicated their reasoned intelligence in favor of altruistic belief. In other words, they believe it is better to give favors than to create profit.

Our hired hands see themselves as our caregivers—our parent, our protectors, our Aunt Emma. This is not the job they were hired to do. They were hired to function as our legal agents (our fictitious persons) only in those instances where we are not available to so act. Their actions are strictly controlled by the contract we hold with them, which they have taken a public oath to uphold.

Most of them need to be fired. We have done a lousy job of interviewing and hiring the right kinds of people to run our government for us—the kinds of people who actually do have an intellect equal to ours and are not afraid to use it in our best interest.

But this blog isn’t about politics; it’s about finding a physically based, intellectually understandable, explanation for the purposeful creation of that sound which is visually symbolized as God, right here on earth.

As previously noted, like the beasts, humans have the ability to create specific kinds of sound symbols to denote the existence of that which they sensually know to exist.

1) Was the visual symbol 'God' created to denote something other than the vocally created sound symbol God? No, it wasn't!

2) Is the sound symbol 'God' something other than what the visual symbol 'God' was created to denote the vocalized existence of? No, it isn't!

God is fully and only an audio/visual symbol created by the human mind. It is properly said that it is the human mind that is responsible for bringing God into existence right here on earth.

What do we tell others when they ask us to explain why we bring God into existence?

Absent such a rigorous requirement, the conclusions we reach will not be able to withstand the pressure of their own absurdity. The absence of such a requirement will leave open the door of human emotion, opinion, whim, crying, prayer, pleading, begging, force, threat, demand, and all like such nonsense.

The universal nature of this requirement demands the development of a new philosophy. A philosophy based in the conceptual nature of human intelligence. A philosophy based on what is understood to be the case with regard to what we are, where we are living, and what these require of our physical and intellectual behavior prior to being able to consider ourselves to be a properly functioning human being.

Defining the terms of a philosophy in such a way will allow us to use them to explain the nature of human nature and that upon which its happy existence depends.

Such a philosophy has been developed. It is called: The Philosophy of Explanation.