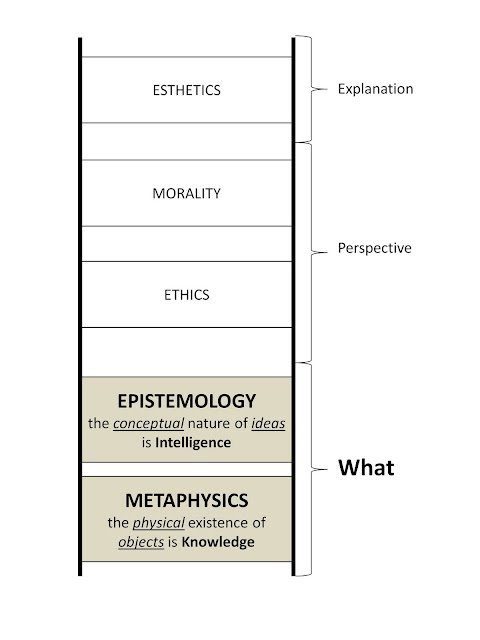 When considering how to explain the metaphysical rung of the philosophical ladder, the focus of our concern is on the real existence of the absolute nature of physical reality.

It can be properly said that the real nature of the physical existence of the objects of reality is absolute. This is not to say that things in reality do not change. The “absolute nature of physical reality” is not a time-sensitive idea.

A word permits us to transmit, and thereby place within the brain of another, symbolic evidence of that which we sensually know to exist in a real physical way.

It is of particular interest to note that purposefully created human sound symbols can be transferred into the brains of certain non-humans. A dog, for example, can be trained to respond to the human sound visually symbolized as sit.

It is also of particular interest to note that the reverse has never occurred. There is not even one instance where a non-human (a beast) has, or has even attempted, to train a human to respond to its sound symbols. And yet, animals have been observed to communicate with others of their own species. The reason is clear and will soon be explained.

The Epistemological Nature of Concepts

To avoid becoming confused about what it is we are talking about, when we change the focus of our discussion from one rung of the philosophical ladder to the next, we must change the terms we use.

Under metaphysics, our interest is on the existence of the absolute nature of physical objects. Under metaphysics is where we speak about that which is sensually known to exist or that which can be known to exist. The means of knowing that an object exists is brain-sensing. The human brain has five sense organs extending from it. It is the atoms of the sense organs that physiologically and electrochemically interact with the atoms of other objects of physical reality, including other brains. It is in this way that the existence of a real 'physical' object is known to exist and that their sensually acquired knowledge is transmitted through nerves into the rest of the brain for further processed.

Ideas
When we speak epistemologically, we are using concepts. Concepts are derived from ideas, and ideas are based on that which has been understood to be the case about what we know to be the case. The means of knowing that reality exists is sensual, but the method for understanding its nature and what our relationship to it is - is reason.

When we apply our reason to understand the nature of human nature, the result is a concept. Concepts are created from that which is rationally understood rather than that which is merely sensually known to exist. Concepts don’t denote something that is real, they denote something that is ideal. Where real things are automatically know to exist, ideal things must be (can only be) explained. Meaning that concepts are used to explain something about that which is sensually known to be the case. The important issue is not whether an idealized creation (a concept) exists, but is why it was created.

Because ideas are creations of the human mind, they don’t make sense—they can’t make sense. This is because what they denote the existence of doesn’t exist in a physically sensual way. Only physical objects can make sense. This is saying that only the physical, chemical, and electrical nature of an object can cause a physiological and electrochemical interference [i.e., a sensual response] within and to a brain.

Ideas don’t exist in a sensually observable way; they exist in a rationally understood way. The source of the material from which the human mind creates its ideas is provided to it by the five sense organs extending from its brain. In other words: As previously discussed: Ideas are created from imaged fact within the brain. Recall that it is the existence of the sensually known influence of physical reality on a brain that is called - fact. Therefore it is fact that brain consciousness uses to construct it's images.

To provide the absolute meaning of a word only requires pointing at that which is responsible for its existence. This is called an ostensive definition or definition by direct physical referencing. For example, when I point at this object and utter the sound visually symbolized as chair, you sensually know what its meaning is. The meaning of the sound symbol chair is automatically available to you. You don’t need to explain what it is; you only need to show it's physical existence.

To explain the abstract meaning of a concept is a much more difficult task. This requires applying the preexisting conceptual content of one’s mind to that task. The nature of the term concept is itself conceptual. The term concept must be explained; its meaning can only be understood.

To define a concept requires uttering and/or scribing the conceptual content of one’s mind back into reality. This does require thinking. It is thinking that results in one’s conceptual content. But what do we think about? We think about that which we sensually know to be the case. To not think is to either hallucinate or believe—or perhaps it involves a little of each.

The Metaphysical Nature of Knowledge

However, the sense organs extending from our brain have a finite sensual range. This is saying and acknowledging that the human brain’s sense organs cannot know the total physical existence of—and therefore do not know the total physical existence of—everything that is available to be known about even one real object. We therefore can not (and do not) acquire all the knowledge that physically exists. But we do acquire the knowledge that is sensually known to exist.

Data
Since we cannot and therefore do not acquire all the knowledge physically available to us, it is not a proper claim to say that we do acquire knowledge. This is because the term knowledge is an all-encompassing term. When we say that we do acquire knowledge, we are implicitly claiming that we acquire all the available knowledge. The sense organs of our brain simply do not have that capability.
To solve this dilemma, we need to have a term specifically created to denote only that aspect of knowledge which we actually do acquire. That term is data. Data is that aspect of, or sub-set of, knowledge falling within the sensual range of the sense organs extending from our brain.

As we direct the sense organs extending from our brain to observe the absolute nature of physical reality they automatically know that it exists and thereby automatically transmit its data into our brain for further processing.

When a scientist, doctor, engineer, student, parent, infant, or other is collecting data with which to draw a conclusion, make a decision, offer a recommendation, or simply know that something exists, that individual is collecting data from that which their brain actually knows to exist in a sensually potent way.

To test this claim, simply look at an object. Now, without doing anything else, don’t see it. You now understand what the automatically occurring data acquisition function of the sense organs extending from your brain is. You may not understand how it functions, but you do know that it is functioning and that you do not; and cannot, have any influence over how it functions. Data acquisition by a brain occurs automatically and continuously.

The Epistemological Nature of Intelligence

When again considering the epistemological rung of the philosophical ladder, recall that the focus of our interest is intelligence.

Conceptualization
The creative process responsible for abstracting intelligence from knowledge is conceptualization. Intelligence, then, is the epistemological concomitant of the absolute nature of the knowledge upon which the abstract nature of its conceptual existence depends. It is impossible for one to be considered intelligent in the absence of knowing what it is one is talking about.

The Metaphysical Nature of Communication

We transmit the physical nature of the data our brain has sensually acquired to another by creating specific kinds of audio/visual symbols called words.

Note that under the idea of communication, we don’t transmit intelligence—we transmit knowledge. It is as if the word symbol and the knowledge it was created to denote the existence of are one and the same. Caution: they are not!

The Epistemological Nature of Language

A concept is different from a word; it is its epistemological expansion. In other words, the epistemological nature of concept represents an evolutionary advancement over the metaphysical nature of word. Concept extends the sensual nature of word from knowing to understanding. Where words are based in and therefore reveal the objects of reality, concepts are based in and therefore reveal the ideas of intelligence.

Fact
Fact is the interface existing between and object of reality and our brain. The automatically occurring sensual nature fact cannot be denied by a mind, but it can be ignored—to its peril. Fact exists as the point of sensually potent contact between a brain and some other physical aspect of reality. That sensually potent point of contact is called fact because it actually does exist. The denial of fact by a mind has no effect on its physiological and electrochemical nature.


As Promised
The reason none of the beasts (the non-human animals) have never taught us their language, or have never even demonstrated an interest in doing so, is because beasts don’t have a language. And this is because they don’t have—i.e., have not demonstrated the existence of—a perceptual mind, an understanding mind, a rational mind, a conceptual mind. They have not demonstrated that mental
activity termed conceptual-reasoning. Meaning, they are not able to rationally translate objective knowledge into conceptual intelligence. And it is the ability to conceptualize knowledge into intelligence that is a prerequisite for the creation of language. Language is evolutionarily different from what beastly communication is—it is an epistemological expansion on its metaphysical nature. Human language represents an evolutionary advancement over the metaphysical nature of beastly communication.

In the following pages we are going to bear down on the philosophic grouping of ethics and morality. The purpose is to eventually uncover the nature of human happiness and that upon which its eternal existence right here on earth depends.

This will likely proceed in a manner you may not have experienced in the past. It is this author’s seriously considered view that the existing manifold volumes of the philosophical works of countless others, covering many hundreds of years and written by those who are considered to be experts in the field of philosophic investigation, is not only grossly inaccurate and very misguided but may represent some kind of special, as yet undiagnosed, mental illness.

Then I will reveal both the Metaphysical and Epistemological nature of  God.


Go To "The Perspective Group"