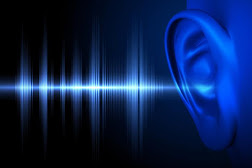 If you were to walk into a forest and stand quietly beside a flowing brook, you would soon become aware of various types of sound.

Noise
You would become aware of the sound produced as the water flows down the brook and as the wind blows though the trees and grasses. This sound has been named: it is called noise. Noise is the name assigned to naturally occurring sound. It results from nature interacting with nature at the inanimate level.

Communication
As you continued to stand there, you would become aware of another type of sound, the sound that the forest animals (i.e., the beasts) make. Forest animals purposefully make sound. This purposefully created sound is not called noise, it is called communication. Forest animals communicate what they are conscious of by making specific kinds of sounds to denote that it exists. The purpose of animal communication, then, is to vocally symbolize the conscious existence of a physical something or relationship. For example, forest animals communicate anger, fear, acceptance, and a desire to mate. The sounds forest animals make can seem quite noisy to humans, because their sounds seem to lack a well defined or understandable purpose. When the sounds of forest-animal communication lack a known or defined purpose, they revert back to being called noise.

Language
Then, as you returned to society, you would become aware of the sounds that humans create. Like all high-functioning animals, humans also purposefully create sound. But purposefully created human sound is not called communication. It is called language. Unlike forest-animal communication, the purpose of which is to vocally symbolize the conscious existence of a sensually known something or relationship, the purpose of human language is to explain the nature of human nature and that upon which its continued happy existence depends.

They may believe they are using language in a proper human way, but they are not. Even the human language, when not referencing something known or knowable, reverts back to being called noise.

To keep this blog from being considered noisy, I will begin by discussing why humans make certain types of audio/visual symbols called the terms of their language, and then advance that discussion until I get to the sound visually symbolized as explanation. Then I will have the material with which to develop a completely new philosophy:


The Philosophy of Explanation

From this foundation, I will be able to explain the sound visually symbolized as - God. But ﬁrst we must start with something much more concrete.